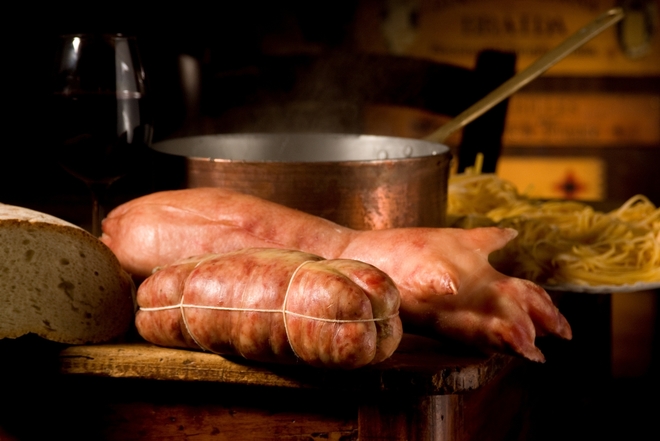 Those who are preparing the Cenone per Capodanno (New Year’s eve feast) will be faced with this conundrum ‘Are we having zampone or cotechino with our lenticchie tonight?’.

‘Are we having zampone or cotechino with our lenticchie tonight?’.

Everybody in Italy knows that having zampone or cotechino with lenticchie at Capodanno brings good luck for the new year, but some people prefer the zampone (the pork trotter) and some others prefer the cotechino (the salame shaped one). Actually, they are ‘brothers’ made with the same ingredients. In fact, the content is the same: pork minced meat and fat, some spices such as cloves, cinnamon and nutmeg (each butcher might have their own secret recipe!), but the ‘container’ of the zampone is a pork rear trotter while for the cotechino it is the lining of pork gut… Experts say that the cotechino is going to be more tender because of the nature of its casing, while the zampone is going to offer a more chewy combination between the soft inside and the harder rind… We also have to say that some people just don’t like finding a pork trotter in their plate and they will definitely go for the cotechino!

Both, zampone e cotechino come from Modena (Emilia Romagna) and they need to be cooked for at least 2 hours (unless you go for the precooked ones which are very popular and you will find them in every supermarket).. here is a recipe if you’d like to try this lovely Italian plate tonight.

Casa dolce casa (home sweet home)
Italiano is about to start in the College of Commerce… haven’t you enrolled, yet? Mamma mia! Andiamo! Let’s go!