By admin on November 7, 2012 in Uncategorized 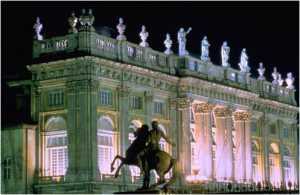 I came to terms with the fact that when I say to anyone in Ireland: ‘I am from Turin’, they answer: ‘ah, Fiat’ and sometimes they also say: ‘Juventus!’. Thankfully, this is not what Turin is about and those who went there can confirm it. In fact, although Turin is a big and industrial city, it is beautiful and has many historical and artistic treasures to offer to its visitors. Thus, in order to give a chance to shed a bit of light on these treasures, I have started to show a short presentation on my home town during my 2,5 hour lessons at the College of Commerce. I am delighted to see that all of my students are suitably impressed by the view of majestic royal castles, neoclassic and baroque churches, beautiful gardens, Roman city walls, enchanting old cafes and so on. One of my students could not believe that it was possible to have a coffee and read a book in one of those bars, such as Caffe Torino or Gelateria Fiorio. Do not worry about the price of the coffee, it is the same as other bars, we are not in Piazza Marconi in Venice!

Not many people know that Turin was the first capital of Italy and that the royal family lived there until 1946, when Italy became a republic. This is why we have so many beautiful royal residences and castles. Turin also hosted the first Italian parliament in Palazzo Carignano, a beautiful baroque residence which nowadays hosts the library of the University of Turin, the museum of Risorgimento and Carignano Theatre.

Let not forget that Turin is also the home of the Holy Shroud, the mystery

Differences between the North and South of Italy
Teaching Italian