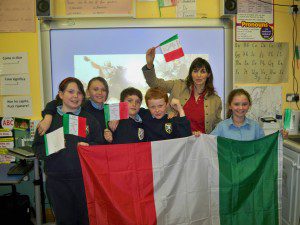 Carolina Costamagna completed her Bachelor Degree with Honours in Educational Sciences in Turin with first class honours in September 2002. Beforehand, she took her leaving certificate at the ‘Istituto Magistrale Regina Margherita’ (secondary school to prepare future teachers) also in Turin. she is fully qualified to teach (and train other teachers) in pre-schools, schools and training centres. During her course of study she went on Erasmus to Paris and gained a Diploma in French Language and Civilisation.

The course of her life and her decision to become a teacher was strongly determined by the positive influence of her primary school teacher. Carolina, realized the key role which teachers have in students’ lives to empower and inspire and the great joy and fulfilment one can gain from it. Teaching, therefore, is not only her job, but her passion.

Since she graduated in 2002, she is been teaching several subjects including IT, English, French and Italian to adults, teenagers and children. In Ireland she is been teaching Italian at the College of Commerce for over 5 years and in primary schools for more than 4 years.

Carolina is a strong supporter of the Communicative Approach which puts the students at the centre of the educational process. She favours interactive and engaging educational methodologies which stimulate children’s interest and focus using tools such as presentations, videos, songs, games and role playing.

Since her son Kevin was born in 2010, she has been studying bilingualism and has been eager to give Kevin this gift which it is much more than just having two languages.